Who's Afraid of Christabel

On All Hallow's Eve, Virginia summoned the ghost of her dead mother. By candlelight, she selected a photograph which showed Julia's classic profile illuminated against a black backdrop, light against shadow, the eternal struggle. In stories, light always triumphed, but in real life, darkness had a way of insinuating itself into family affairs. For too many years, the darkness of night and the silence of things which could not be spoken had held sway in the Stephens household. No longer. Tonight, the dead would speak, and the living would be forced to hear.

Her mother's image clear in her mind, Virginia turned from the photograph to the book in order to arm herself with words which Coleridge had written almost a century before. "'Tis the middle of the night by the castle clock--'" True, but hardly pertinent. She scanned the page. When she found the words which she sought, she read them aloud.

There was no tree beside the window of the attic room where Virginia conducted her midnight summoning, but she had acquired an oak branch with a little piece of shriveled mistletoe still clinging to the bark. She held the limb in one hand and her candle in the other, as she recited the poet's words.Did the wind pick up a little at the end? She listened for several long moments. Hearing nothing, she laid down the branch and turned the page. Underlined in red ink were the words

At the sound of these words, the wind definitely picked up. The shutters creaked. Somewhere, in the distance, a dog howled. The hairs on the backs of Virginia's arms rose. She was suddenly afraid. Afraid of what? Not of God. Of her mother? What would Julia say if she knew the secret her daughter had hidden all these years? Would she blame the girl or the man, Virginia's half brother? Eve brought sin into the world, the Christians said. However, Christianity played no part in this agnostic home on any night, especially not this one.

She choked on the final word and could not continue. No need. The frightening memories which the lines triggered were enough to ignite the spell. The wind blew open the attic shutters and extinguished the candle flame. Moonlight poured through the open window, coalescing to form the shape of a woman dressed in a white shroud.

"Who calls?" the ghost asked.

Virginia swallowed. "It's me. Your daughter."

"Why do you disturb my rest?"

She licked her lips. The words would not come. There were some things which were never meant to be spoken aloud. Better to leave it all in darkness, sweep it under the bed, lock it in a closet and throw away the key.

The specter oozed across the attic floor. It held out one white, thin, translucent hand. "You tremble. Why?"

Soothed by the sound of her mother's voice, Virginia replied. "I--I'm afraid."

"Afraid?" The ghostly woman's smooth brow was marred by a frown. "What troubles you?"

The spectral face lost its beauty.A serpent stared down at her, a hooded cobra with glowing eyes. "What hasss he done?" the apparition hissed.

Terrified, Virginia clutched the book of poems. She raised the heavy volume overhead, as if to hurl it at the serpentine spirit, but at the last moment, she dropped the book. Or rather, she let go of it. The leather bound volume continued to hover in mid air between the girl and the ghost .

The spirit extended her pale, iridescent hand. With one finger, she turned the pages until she found the poem's final stanza. The words glowed in the darkness, as if they had been written with a quill dipped in fire.

The serpent-woman's lips moved as she read the blazing words. Her glowing eyes narrowed. Her white shroud turned a deep, crimson red.

"Enough!" the ghost said. "Sleep here, tonight. I will take your place in your bed." She shook her head, throwing off sparks which struck the walls, floor and ceiling of the attic, forming tiny, glowing globules of light. Worm like, the creatures slithered to the center of the floor, where they merged to form a white, sack like structure. Slowly, the luminous blob took the shape of a naked girl, first the body, then the arms and legs, finally the head. When the transformation was complete, the creature wore Virginia's face

"What will you do?" her daughter asked.

"Better for you not to know. Stay here and think about Christabel, a poor mute girl who could not defend herself. Do you want to share her fate, Virginia? If not, you must become a warrior who uses words as her weapon. Take up a pen, child and write down everything that your brother has done. Leave out nothing. Make two copies. In the morning, hand him one and keep the other."

With these words, the spirit sank into the floor. Below lay Virginia's room. The girl pictured the creature shaped like her putting on one of her nightgowns, crawling between the sheets of her bed, lying there in the darkness, waiting for the sound of heavy footsteps, the fumbling at the doorknob, the creak of bedsprings--

"Take up a pen and write down everything that your brother has done," her mother had told her.

Virginia rekindled the flame of her candle. She found paper and ink in a old schoolroom desk. By moonlight and candlelight, she began to write down the details of the various acts committed upon her body by her half brother . There was something reassuring about putting the words down on the page. She recalled the feeling of relief that she had felt when she had first read "Christabel" and recognized the story hidden within the story.

However, unlike Christabel, hers would be no hidden tale. Virginia described her brother's actions with scientific accuracy. Enough shadows, enough silence. She was a warrior and words were her weapon...

She fell asleep in the middle of making the second draft. Early next morning, she finished the copy. Then, she crept downstairs to her room.

The covers of her bed had been tossed aside, and the pillow lay on the floor on the far side of the room. No bloody accusation was scrawled across the wall. No penitent villain dangled by a noose from the curtain rod. The scene was almost depressingly normal.

However, there was a difference. She could not put her finger on it, but she grew strangely calm as she washed and dressed. When she was ready, she picked up one copy of the document she had written and proceeded downstairs.

She was both relieved and disappointed to see her brother sitting alone at the breakfast table. It would have been convenient if he had died of fright. On the other hand, if he had died, his death would have been on her conscience, and she had already carried more than her share of guilt, thanks to him.

She sat down at the table across from him. He looked pale, and he avoided looking her in the eye, even when she asked him to pass the jam. What had her mother said to him? What had she done?

Recalling her mother's instructions, Virginia passed the handwritten pages across the table. As George read them, his face turned even whiter. "Lies," he whispered. "It didn't happen the way you wrote it. You've twisted everything around. Like you did last night naked on the bed, your legs spread so wantonly, your eyes cold and mocking, filth rolling off your tongue--- " He choked and his face turned purple.

Calmly, Virginia asked "Is something stuck in your throat? Do you want me to hit you on the back?"

Shaking his head, her half brother fled the room, clutching the incriminating document.

Smiling for the first time in months, Virginia poured herself a cup of tea. The pen truly was mightier than the sword. She had chosen her weapon well.

The End
Copyright © 2003 by McCamy Taylor 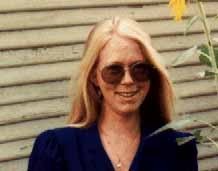 McCamy is a long time contributor to Aphelion as well as Assistant Short Story Editor. You can find out all about her and her work by following the link below to her new and improved (Post) Millennium Fiction website.