A nerve shattering iron clang rang out, echoing down the empty corridors. An unusual silence permeated the facility and hung in the air like a thick fog. Silence was a stranger here.

Officer O’Neal felt the hairs on his arms standing up. Something eerie was afoot. Something evil. It had to be pretty damned evil to penetrate this air.

"Psst. New Guy!" The inmate behind the bars closest to O’Neal’s right whispered.

"D’you know ‘bout him?" The inmate hissed in a whisper, almost terrified, as if afraid to speak for fear of being heard.

"Shh! Keep it down, man! You gonna get us killed." The inmate shuffled back farther from the bars and into the dimly lit shadows of his cell.

"Well. Don’t know exactly who he is," The inmate began, "All I know is he shows up from time to time and whacks someones."

"Well, he’s in the right place then." O’Neal chuckled and turned to continue his walk down the corridor.

O’Neal waved over his shoulder and continued walking. It was strange, no one talking, yelling, making noise. No plumbing rattling, no Johns flushing. Just silence.

He stopped in front of the bars of an old timer. O’Neal noticed the old timer was sitting on his bed playing solitaire silently.

The older man looked up. He held a finger to his lips and picked up a pen and pad of paper. He wrote the word, "What?" on it and held it up for O’Neal to read.

The man turned the paper back around facing him again, and wrote the word, "No!" on it. Then he held it up again.

"No? Then why are you writing on that paper?"

The man scribbled furiously. "Don't want him to hear me." He had underlined him about three times.

"Him again?" O’Neal asked. "Fellow down aways was telling me about him too. Who is this him?"

O’Neal was taken aback a bit by this confession. He was talking to a man who had butchered six people and now that same man was telling him he was afraid?

"Why doesn’t anyone know who this 'evil him' is? And, while we’re on the subject, How do you know he’s here?" O’Neal scratched his side through his stiff uniform.

O’Neal grunted. "How do you know Jones is missing?"

The radio was quiet.

"Come in?" O’Neal listened to the hum and hiss of the radio.

"Uh. Yeah. O’Neal. Warden says for you to come to his office." The radio went silent.

The older inmate smiled and held up his paper again, it read: "You up the creek now, New Guy."

O’Neal laughed and turned towards the warden’s office. It was a room that faced and hung over the mess hall. It was a boxy looking office, with three shatter, bulletproof Plexiglas walls for observing the prisoners while they ate.

O’Neal opened the door and went inside.

"O’Neal! What the hell are you doing?" The warden swung around in his swivel chair.

"Asking about Jones!" The warden spat.

"Wanted to verify if he was missing, Sir. There is a rumor…"

"Rumor! Hell! Jones is dead. He ain’t missing at all, well, his skin is, but the rest of him is right where he was, washing dishes in the kitchen, or rather, he was."

"What the hell?" O’Neal asked, dumbfounded.

"Skinned. Alive too, I think." The warden flipped through a ring binder on his desk, casually.

"Pardon me for asking, Sir, but aren’t you just a bit upset by this?"

"Happens." The warden closed the ring binder with a sharp smack.

"Here. Look for yourself." The warden pushed the ring binder across the desktop with his index finger.

O’Neal knitted his brows together and sat down in the chair facing the warden’s desk. He started in the front of the binder; it was the current reports on Jones, with some grizzly photos. He flipped through the book, the dates ranged all the way back to 1945.

"Warden? Maybe I’m new and all, but can you explain how all these prisoners ended up skinned within the walls of the prison?"

"No." The warden pursed his lips and drummed his fingers on the desk.

"Sorry, O’Neal. Don’t have a plausible explanation for you. All kinds of theories have been chased around. Full moon. Monsters. Werewolves. Vampires." The warden wiggled his fingers in front of him in a creepy-crawly motion, then made a cross with his two index fingers. "But, truth is, no one knows. No pattern to it. No rhyme or reason. Completely 100% random."

"I think I missed something. What is random?" O’Neal emphasized the word random.

"You mean people being skinned alive?"

"Well, not exactly skinned in the traditional sense. It’s more like the skin has been sucked clean off their bodies."

"Here’s what we know, O’Neal. Every so often, this evil force or whatever the hell it is, comes around, sucks the skin off some guy somewhere in the prison and then high tails it out of here."

"Oh, No. Sometimes guards. A janitor or two. Like I said, It’s random. Never the same place twice."

"Hmm." O’Neal pushed the binder across the desk. "And, no one in all these years, has seen it, or him?" He was still having trouble buying this whole story.

"Here. Look at this." The warden flipped a switch on the TV monitor, and a gray and black surveillance tape started playing. There was Jones washing dishes one moment, then a blinding fast blur obscured the camera, and then there was Jones in a puddle of gore, with no skin, on the floor.

"Whatever that is, it ain’t God, son." The warden flipped off the monitor by remote control.

"So, what happens now?" O’Neal shuddered.

"Prisoners will be quiet for a few days. Lie low until they know no one else got whacked, then everything will resume normally." The warden shrugged.

"So, who does everyone believe 'him' to be?" O’Neal asked.

"Well, the most popular story is, that he was a Nazi soldier that the guards got a hold of, they were supposed to be transporting him to a POW camp, and instead they bricked him up in the old upstairs boiler room."

"Yeah. Alive. Left him there. So, now he comes around every once in awhile and sucks the skin off people."

"Because he got bricked up?" O’Neal questioned.

"Bricked up, but before that, the guards supposedly let four prisoners, well, skin the Nazi bastard alive. Then they bricked him up." The warden winced.

"Oh, then they bricked him up." O’Neal said sarcastically. "Is any of this documented?"

"No, not really. Never found the supposed bricked up boiler room. There was a record of a German prisoner of war being held overnight, but he was transported the next day according to schedule."

"Yep. Long time ago." The warden leaned back in his chair.

"Nice story. Doesn’t explain how Jones got skinned though." O’Neal touched his chin in thought.

"Nope. It doesn’t. There will be people crawling all over this place trying to explain that. In the meantime, I am going to have to explain why your butt is in here chitchatting with me instead of walking those halls. Better get back to work." He pointed towards the corridor.

O’Neal shook his head and opened the door.

"Catch you later." He said and closed the door.

O’Neal clip-clopped his way down the hall, past the first inmate he had talked with earlier.

"Warden tell you about him, didn’t he?"

"Did he tell you about all that Nazi hogshit?"

"Don’t believe none of that. Ain’t what happened."

"Why would they want to kill those other prisoners?" O’Neal asked.

"So, there’s really five dead guys who are pissed off, going around skinning people?" O’Neal held up a hand with his five fingers spread apart.

"That’s why you never know what’s up. Five dead dudes, all pissed off and all got their reasons." The inmate shrugged.

O’Neal let out a low whistle.

"Yeah. Nuts, man. Last year. They found this dude hangin’ from the showerhead by a piece of his own shirt, not a scrap of skin left on him. That’s some messed up shit, man." The inmate shook his head slowly.

"You need to talk to Schmit."

"Yeah. Old white dude. ‘Bout 80 or some shit like that. Old dude. Been here since all this crap went down."

"Maybe before that. Old, old dude."

"You in luck. Six cells down, that way." The inmate poked his finger down the hall.

"Thanks." O’Neal nodded at the man.

O’Neal walked down the six cells and tapped on the bars. An elderly man looked up from his bed and slowly sat himself up.

"You new?" The man bellowed at a deafening volume.

"That’s me." Schmit leaned back and crossed his thin arms.

"Do you know anything about all this him business?" O’Neal asked quietly, but loud enough for the old guy to hear him.

O’Neal could tell Schmit was a man of few words.

"You’ve been here since all this bricking in business supposedly took place?"

O’Neal laughed. "Okay! Okay! Sorry to disturb your beauty sleep! Go on back to sleep." He laughed again.

O’Neal shook his head. "Ghost tales. Freakin’ God damned Ghost stories!" He muttered to himself as he continued on his rounds.

He reached the oldest part of the prison and noticed a light bulb flickering. He looked up towards the skylights for a sign of rain or lightening, but there was none. Bulb must be going, O’Neal thought to himself.

He radioed for janitorial to come up.

"That’s a negative, O’Neal. Janitorial has been told to hold all duties till tomorrow. All inmate janitors as well."

"Because of the Jones incident?"

"What about the bulb?" O’Neal hated slackers.

"Oh, goody." O’Neal shut his radio off. Now he was doing the janitor’s job too. They didn’t pay him enough to do either one of these jobs, not to mention two jobs.

O’Neal punched in his code, quite surprised that someone had taken the thought to modernize things in this wing of the prison, he pushed the door. It popped open and the light automatically flicked on. The door closed behind him. He looked up and down the shelves until he located the shelf with all the bulbs lined up in neat, tidy rows in their crisp cardboard boxes. He snatched one, left the cardboard crumpled on the shelf for janitorial to clean up, and turned to leave.

The light in the supply closet flickered.

The light flickered and buzzed.

O’Neal reached for the door handle, but was suddenly thrown backwards, across the deep closet, and hard against the old brick wall.

"What the hell?" O’Neal said aloud.

He felt an odd sensation like a vacuum engulfing him as he was slammed to the floor.

The light crackled, popped, and went out.

O’Neal was aware of a rather strange sucking noise and felt something strip his clothes off, shoes and all, in one sharp, terrifying movement. He struggled to get up, but an invisible force pinned him to the cold, cracked, concrete floor. Searing pain enveloped his body as he felt his skin being sucked off of him like someone had just flipped on a giant, antique Hoover…and he was the carpet.

It suddenly dawned on him, what was happening.

His last pain-racked thoughts raced through his mind and he concluded, that the only thing that sucked worse than his skin actually being sucked off of him, was still not knowing who him was.

The End
Copyright © 2002 by Angeline Hawkes-Craig 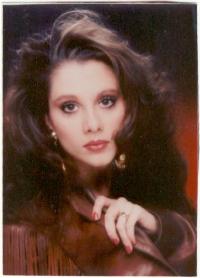 Angie lives in Rowlett, Texas. She is married and has two children. She is a member of The Writer's League of Texas. Her novel, The Swan Road, was published in September. For more information, please visit her web-site.