A tale of Bethdish

When they finally arrived at the center of the Pyramid they had caused enough carnage to glut the appetite of any primitive's God. They were attacked three times, each time they gave good account of themselves.

When Beloq and his party of thieves reach the central area of the pyramid, they find a giant, jeweled statue and several chests of what they hoped would turn out to be treasure.

The statue stood, looking suitably alien and demonic, against the far wall of the temple's inner sanctum. It grasped a weighted net in one hand and a wicked looking sword with serrated edges in the other. A menacing expression peered out at them from a face seemingly made up of fangs and tusks- it's ruby eyes gleamed evily in the flickering torchlight coming from the half dozen or so sconces mounted on the room's walls.

"It looks like it's been carved from a single piece of jade," said Seilene as they stared in amazement which bordered on stupification. The torches made the statue seem to move as the shadows flickered and danced around the room.

"Hostiles approaching!" said PXR5. 'Two, four, seven- ten of them coming from two different directions; there and there." The robot pointed to two of the room's side doors, one on each side of the room. "They are armed in a similar manner to the guards upstairs, except that their armor is of better quality and they are all much larger individuals."

"This is their temple, so they'll try not to damage anything in the room but us," Beloq predicted. "How much time do we have?"

"Gryphon, up against the wall next to that door- Resthal, behind him and cover his back. Seilene, I want a curtain of smoke up the hallway behind this door. And douse those torches, if its dim enough we may get an extra moment."

"Ready," said Seilene as she took two canisters out of a pouch on her belt. "Just give the word and they'll be blind and vomiting for hours!"

"Robot, move to the center of the room and create a diversion."

"What sort of diversion?" the Robot asked as it reached it's assigned position.

"Flashing lights! Loud noises! Hell! Sing and dance if that's what it takes! Just keep their attention off of us for as long as you can! How close are they now?"

"Now, Seilene!" Beloq shouted as he threw the door open. Seilene pulled the pins on the gas grenades in her hands and threw them down the short halfway toward the surprised guards. Beloq slammed the door as the grenades began to spew out a thick grey smoke which rapidly filled the narrow confines of the hallway. The smoke soon began to drift into other passageways of the alien temple. Beloq smiled to himself as he heard the approaching guards stop and concentrate upon making gagging, gasping noises. The grin on Seilene's face could probably be picked up on radar and seemed to almost split her face in two.

"Those six will be unable to attack for some time," said the Robot.

Resthal tightened his grip on the scattergun that he had pulled from a scabbard fastened to his pack. The little thief was scared- he didn't like the way events tended to disintegrate into rough stuff whenever his companions were involved in some type of heist. He ferverently wished he were back wherever it was that he had come from- If only he could remember where that really was. If he was to have time to dwell upon it, he could recall a ship of some sort. He also had vague memories of friends- or at least companions that he trusted. Beloq, Seilene, and Gryphon were good people to have at your side in a fight, but they weren't the people from his fleeting memories. "Best not to get distracted," he thought, "or I could wind up dead!" He heard the other door crunch and splinter as he gripped his weapon in suddenly sweat-slicked hands.

As the other four troopers crashed through the remaining door, the robot clattered and lights on its frame blazed to life like a radioactive Christmas tree in an acid freak's nightmares. Lasers, strobes, and searchlights blared out- bathing the troopers in the combined glare. The Robot emitted a loud hum which quickly changed to a scratching whisper. Suddenly the noise became a thunderclap of sound, not unlike ponderous masses of metal being ripped and shredded by unseen hands. The troopers clapped their hands to their ears as the sound from the robot reached what Resthal prayed was a maximum volume. It was all that Beloq and the others could do to keep from collapsing as they gasped at the robot's antics. The troopers fell to the floor in a swoon as the Robot roared half articulate words to match the screeching sounds.

The echo of the words seemed to go on forever as the robot spun around in the center of the room, his treads throwing sparks as they churned against the flagstone floor.

Gryphon looked disappointed as he saw the guards laying in a helpless swoon on the temple floor.

"Hostiles immobilized," said the robot in its normal voice as the last echoes died.

"Shit," said Gryphon in the sudden stillness, his voice seeming overloud after the aural onslaught. "I didn't even get to bash somebody. That sucks!"

"I can live with it," said Resthal "I don't think that I could live without it, really."

"What was that?" asked Seilene.

"Classical Music," said Beloq. "Best taken in smaller quantities, or so it looks."

Gryphon and Seilene grin at each other and Beloq tells them to start loading up treasure from the altar in front of the statue. Resthal starts grabbing up loose gemstones and coins and filling several drawstring bags taken from his pack as soon as he opens the chests near the altar.


I stand, undetectable to the party, in the third hallway that leads into the room. My sensors detect another lifeform, very powerful, detectable on wavebands that only register psionic activity at extremely high levels- it is entering the room with the others. I start forward to stop at the door and listen carefully to the room beyond. From the sounds within I can reconstruct the action as if I had seen it with my own sensors. As I listen intently, the statue comes to life and attacks the adventurers. Resthal runs like a scared rabbit and manages to knock over temple furnishings into the statue's path. Gryphon pulls out his favorite axe and proceeds to ruin it's edge by chopping futilely at the statue. After only a few strokes he is hurled bodily away from the demon-possessed statue. Seilene tosses a fireball at the statue, while Beloq shoots at it with his "magic wand" as it throws Gryphon across the room. While the shooting is still good and his companions out of the line of fire, Resthal lets fly with the scattergun.

Nothing seems to hurt the statue. All seems lost. For picoseconds I debate the merits of bursting into the chamber to save them. Surely the Collector would understand.

Just as the statue closes in for the kill, the PXR5 tells them to cover their ears. Then he emits a shrill whine which quickly rises in pitch until the adventurers can no longer hear it. I can, however- sensors detect sonic pulses that register almost off of the scale my instruments are able to detect. I chance a quick visual scan through a hole I punch in the door with my finger. What I see can scarcely be believed.

Smoke and dust motes in the air swirl and move, seeming to outline a solid beam of sound reaching out to the statue from the robot. The statue stops, staggers, and explodes in a shower of rock chips. So much for the half-ton of priceless jade that the statue had been carved from. I sense the presence that had animated the statue retreat from the room as if in fear.

"I'm starting to like this classical music stuff after all," said Gryphon.

"PXR5, get us the hell out of here!" Beloq shouts.

I leap into an overhead ventilation shaft as the adventurers burst through the door at a dead run. I climb to the outside of the pyramid and hide when I hear the adventurers coming out and heading for their stolen ship. As they resume their journey, I contact the Collector to report and to request coordinates for the adventurers's next destination. I conclude that the Collector was correct in his decision to allow these people to prove themselves. They may yet find themselves useful to him. 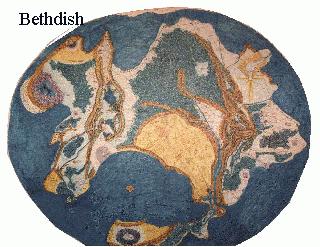 Bethdish is a world circling a star, called Antuth by the natives (who named the star after the chief deity in their pantheon), presently some 65 lightyears from Earth. Rumor has it that the entire solar system had earlier been located in the Andromeda Galaxy, but was moved by some mysterious force to its new location in our own Milky Way Galaxy. The surviving written history of Bethdish covers some 12,000 years, (with the afore-mentioned displacement to the Milky Way occuring in their year 6055 -- circa 3140 AD, Terran Calendar) but the records of the Immortals reportedly go back roughly a billion years and relate the rise and fall of several civilized eras of non-immortal natives before the present recorded history begins.

The Immortals claim to have been directly created by the Gods of Bethdish, while the diverse non-immortal species are said to have evolved naturally. The several alien colonies now present are, of course, immigrants. One Xenoarcheologist of note, Professor Eustas Gray of the Emperor Norton University of San Francisco, has published several monographs on the subject of excavations on Bethdish that purport to uphold the Immortal's beliefs. Other experts in the field dispute his findings, but all the evidence is not yet in.

Further records of the history of Bethdish are forthcoming from this Author, while previous excerpts are available in your local information network.

Dan Hollifield (I'm Aphelion's Editor, by the way) was born in 1957 at almost the same minute that Sputnik II was launched. This seems to have warped his point of view in the fact that he has always been rather a nut on the subject of spaceflight. He lives in Athens, Ga. USA. More biographical info can be found at The Mare Inebrium website- if you need that sort of thing.

If you like this story and you wish to tell me so you can e-mail me by clicking here. And thanks for visiting Aphelion!

Aphelion Letter Column A place for your opinions.