Frankenstein:
The Dawning and the Passing 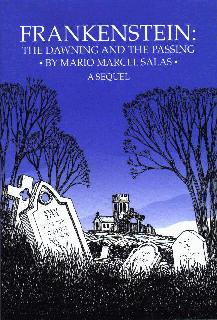 General impressions of the album/book:

I didn't want to put it down! A real page-turner.

The care in crafting this sequel to Mary Shelly's classic is evident, as is Mr. Salas' love for the original story. I was impressed not only by the story itself, but by the use of the history and language of the period. After I was finished reading the story, I had time to consider what Mr. Salas has achieved with this sequel to a great work of classic literature. His knowledge of the period is plain, his use of Shelly's backdrops and scenery is a positive delight, and the weaving in of historical detail is a crowning touch. His charactization of the Monster is far closer to Shelly's original than any other that I have seen. I enjoyed the conflict between his narrating characters and their illumination of the continuing struggle between good and evil, between Dr. Golem's obsession and his Assistant, Hamel's responsible search for medical knowledge. These characters leapt from the page as living, breathing, feeling people. Their character flaws only serve to point out their reality. Very nicely done, indeed.

Background info:
Mr. Salas completed his undergraduate degree in English from the University of Texas at San Antonio and received his Masters in Education from Our Lady of the Lake University. He has an Associate in Arts, and an Honorary Doctorate from Guadlupe College. Mr. Salas is also an amateur astronomer and enjoys reading, model rocketry, free lance writing, public speaking, and debating current theories of physics. He is currently a certified educator in the San Antonio School District and an elected official serving as a City Councilman for the City of San Antonio.
Mr. Salas has received many awards for his activites in human rights, including recognition from the State of Texas for initiation of the Martin Luther King Jr. State Holiday. He is a member of Mount Zion First Baptist Church and is married to Edwina L. Salas. They have three children. Mr Salas plans to write several more sequels to classic works of fiction.