Wizard of the Winds

Based on a novel by Allan Cole

Type of music: Fantasy/Techno-pop (although Bjorn prefers to call it "Adventure Music")

General impressions of the album:
Bjorn and Allan are a hard team to beat! Allan Cole's novel is brought even more vividly to life in this musical interpretation of Wizard of the Winds, you feel like your are actually inside the novel as you listen.

Specifics:
As always with Bjorn's music, I was impressed from the very first listen I gave the album. Bjorn is a composer to be watched, and one from whom you can expect more great things in the future. In short, if you don't own a copy of Wizard of the Winds, you are missing part of the "feel" of the book. If there is ever a movie done of Allan Cole's work, it would be ill served by having the soundtrack done by anyone other than Bjorn Lynne! 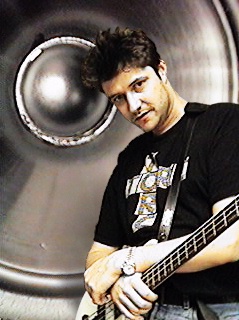 Bjorn Lynne (pictured at the left) has set the story music, and he evokes the middle-eastern flavors, settings, and feel of Allan's novel.

The characters and settings are given their own themes which echo throughout the work. I could almost see the novel as the music swept me along. However, don't think for a moment that Bjorn is trying to re-tell the story that Allan Cole wove so wonderfully in his novel. Rather, Bjorn let the book inspire him to create music that compliments the story. Instead of trying to relate each sword-thrust or the clash of sword upon armor, Bjorn weaves a tapestry of music that illustrates what the magical lands of Allan Cole's imagination would sound and feel like to someone traveling within them.

After having been exposed to both Bjorn's music and Allan's writing, I found a new delight opened before me. More worlds to explore, more cultures to sample, and adventure waiting around each curve and twist of the road that they both led me along. I'll have to go shopping for more of both their works.

Just don't get between me and the bookshelves/CD racks when I meet you at the stores- nothing is going to stand in my way!

I don't know what Bjorn's next project is going to be, but I know that I want to have a copy of it!

Bjorn is originally from Norway, although he now resides in the Yorkshire countrysides of England. He says that for as long as he can remember, he has been interested in Sci-fi and Fantasy literature, practically growing up on Tolkien and Star Trek. He can be e-mailed at lynne@lynnemusic.com and his webpage is at http://www.lynnemusic.com

"Wizard of the Winds" can be purchased online through a secure SSL-encrypted server, by going to Bjorn's web page and just following the instructions from there. Or alternatively, if people have no credit card or they prefer not to tap their credit card number on the web, the CD can also be purchased from these mail order companies in USA:
Syn-Phonic
P.O. Box 2034
La Habra, CA 90631
Phone & fax: (714) 894-9506