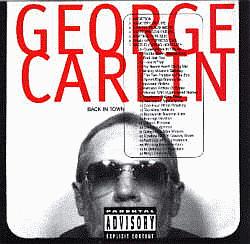 General impressions of the album:
I was rolling on the floor laughing! George has another winner here!

Specifics:
George holds no punches, he says what he thinks and trusts the listener to be adult enough to deal with it. There is an "Adult Language" warning label on the CD's cover, but that's not what I'm talking about. Cusswords are nothing new to Stand-up comedy, or to George's comedy in particular- What I meant was that George points out the failings and stupidity of a wide range of people; Politicians, Big Buisness, Religion, the Military, Anti-abortionists, etc. In short- all those puffed-up, self-important folks that do their best to make the world a lousey place for anyone but them to live in. George deflates their bloated egos with the proverbial "rapier-sharp wit" and manages to give the listener a few serious points to ponder in between the laughs. And that seems to be the real purpose of George's work; He provokes you into thinking, into considering the reality of what he's made you laugh about.

Maybe we should call him a Stand-up Philosopher rather than "just" a Comic.

Background info:
George Carlin has been making folks laugh (and think) for over 36 years and has a dozen or more albums and CDs to his credit, several videos, a too-short-lived TV series, and tours colleges regularly. He has appeared on TV in the major Variety and Talk Shows since the 60s.