Into the Fire
by Phoenix 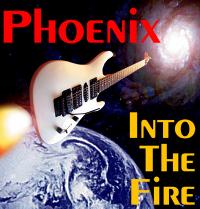 When people ask me, "What is filk, anyway?", I tend to sum it up with the phrase "It's the folk music of science fiction fandom." And although it's not the sense I mean it, a lot of filk is draws directly from folk music stylings. There's many reasons for this, most of which boil down to "It's easy for one person to play with a single instrument, usually a guitar." But in truth, filk draws on all musical styles, from old ballads to broadway showtunes to, yes, even rock and roll.

One group that is expanding the field of filk-rock is Phoenix. On their most recent album, the self-produced "Into The Fire", this British sextet trades the acoustic guitars and simple arangments normally associeted with the genre for searing guitar licks and pounding drums. And for the most part, it works admirably.

The group itself is made up of a trio of married couples: Lissa and Phil Allcock, Annie and Tim Walker, and Anne and Mike Whitaker. Drawing on a wide variety of SF topics for its material -- everything from Frank Herbert's Dune and Anne McCaffrey's The White Dragon to Babylon 5 and Legend -- Phoenix's hard rock arrangements lend an exciting and fresh sound to filk.

It would be impossible to list all the standout tracks on this album, but a few are worth pointing out. No less than two songs on the album were inspired by a single book, Gael Baudino's Gossamer Axe, which I'm told is "required reading" for the band. "Edge Of The Night" and "Rhythm of Life" are both rollicking tunes with a ton of passion. Also impressive are covers of Julia Ecklar's "Tin Soldier", based on Orson Scott Card's Ender's Game, and Leslie Fish's "Black Powder and Alcohol, a post-apocalyptic teaching song delivered with all the fire and fury that its subject demands.

As with most ambitious projects, not every track is a home run. The leadoff track, Zander Nyrond's "Judgement Day", seems lackluster next to a lot of the other songs, and I've heard this band do Tom Smith's "Superman Sex Life Boogie" with more oomph than the version included here. Having said that, though, there isn't a bad song on this album; even the "misses" are interesting.

If your taste in music involves a strong backbeat and wailing guitar solos, this is the filk album you've been searching for. More information about the band, including ordering information, can be found on Phoenix's webpage.


Robert Wynne ("Doc") is a gentleman rogue and a scholar of truth. He has been, at alternate times, a writer, an editor, a salesman, a teacher, a musician, a freelance computer consultant and a charming vagrant. He currently works as a UNIX systems administrator and spends most of his free time making music. You can reach him via e-mail at doc@america.net.