I blinked as a small nuclear bomb went off practically at my elbow. Sensors indicated only 1.2 kiloton yield. Good, only an anti-personnel round, hardly enough to muss my hair. I targeted my opponent and fired a plasma bolt into his main sensor array. While he was assaying the minor damage it caused I moved to a better position, dodging his return fire as I leapt. I looked around the heavily cratered terrain that had been chosen for our combat, seeking my next tactical move, and saw something that I could use.

My foe was near a large fissure, if I could feint him into the proper position I could decoy him over it's edge. I called up a tactical overlay on my visual display while I lased a few particle beams across the thirty miles of smashed and battered ground between us. His return fire spattered down around me, digging more holes in the small moon's airless surface. I leapt again, knowing the dust his rounds had raised would hide me for only a short time. As the dust settled, I activated a decoy beacon that would fool his sensor scans and leapt again into the shadow of a pile of crumbling rubble. The stone would hide me from his scans for a minute or so, giving me plenty of time to plot my next move.

My decoy fired plasma bursts and particle beams in quick salvos, always targeting his sensor array. I edged around the rubble and watched as my foe drove his half-mile bulk to the edge of the fissure and pelted my decoy with more anti-personnel charges. With his gigaton-per-second firepower I knew my enemy would destroy the decoy within seconds. I would either have to strike now or allow the giant war-machine to gain the upper hand. He was almost in position when he discovered my ruse and blasted the decoy into dust. As his sensors swept the area with ever increasing detail I could feel the vibration of his hundred meter treads churning the surface. A vast spray of shattered rock arced into the huge crack in the ground as he reversed his treads. The giant machine slewed to a halt and began backing away from the precipice. 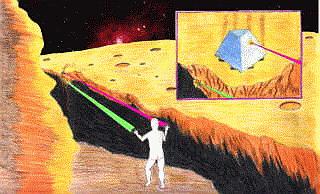 I sprang to the top of the rubble and blasted two streams of white-hot plasma from my fingertips into the cliff beneath him, carving out huge chunks of rock. I had to work fast or he would get to safety. I upped my blast to the allowed limit and the ground caved in beneath him, precipitating the war-machine into the gorge. Valiantly he returned my fire even as he slid into the abyss. I leapt away from his particle beams and projectiles just in time to avoid my own destruction and tuned my radio to the agreed upon frequency.

"Well played, my android friend!" His mechanical voice boomed in my ears, "You were right, I am too much out of practice! I believe you have won the bet."

I could see him at the bottom of the gorge miles below, half buried in the rubble.

"Need a hand getting out, old man?" I asked.

"No. Maxwell," came the reply, "there's a ramp back up to the surface only 2.17 miles away. I'll be out of here before tea-time!" I could see him digging out of the loose rock as he spoke. "Same time next week?" he asked.

"Of course, Havok. But I get to pick the next battlefield, if you don't mind." I grinned and began to brush the dust from my clothes. The old Bolo may be out of shape, but he almost had me a couple of times. "You were right about one thing though..."

"Oh... what pray tell?" he asked as he began his ascent back to the surface.

"This is much better exercise than golf."