My idea of what a Quantam Leap looks like from the side the show never gave us. 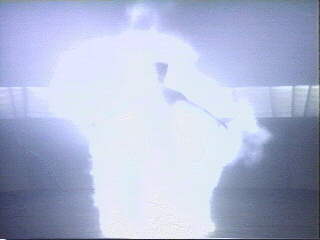 Harvey was having a bad day. He hit the snooze button on his alarm clock one too many times and overslept. Then he discovered that his car was out of gas. At the gas station he got stuck behind someone who seemed determined to break the bank with the lotto machine. By that time Harvey was becoming late for work.
"I'll catch it from Mr. Escue for sure this time!" He thought.

Traffic was very heavy, Harvey was cut off four times as he crept along the freeway in his car. He changed lanes for his exit, looking over his shoulder like a hunted man. Narrowly missing a lady talking on her cellular phone as she drove, Harvey made it to his exit and joined the other cars heading his way. After speeding down a luckily deserted access road, he arrived in the company parking lot just one minute late. Struggling with his car door he managed to get his coat tail caught twice. After freeing himself from the car, he stumbled across the lot and into the building in time to see the elevator doors close as he crossed the lobby.

"Maybe the boss is out sick today. No, isn't today his golf day or something?"
As luck would have it, Mr. Escue was standing in the elevator when the doors opened for Harvey to enter.
"We start work around here promptly on the hour Bennings! Not ten after as you seem to believe. If you don't shape up, and do it quick, you be joining the ranks of the unemployed!"
Escue stomped out across the lobby and out of Harvey's view. As the elevator doors closed Harvey saw a flash of bright light. He was blinded, dizzy, and feeling sick to his stomach. There was a strange piercing whine in his ears and static seemed to dance all over his body. Then there came a final lurch, as if he had nudged the elevator controls as he rubbed his eyes against the blue-white light. The light faded and Harvey was able to see that he was not in the elevator any longer. Not unless the building's elevator had been drastically redecorated. Not to mention stretched. The four blank white walls that confronted Harvey were unbroken by any visible door or window. The lighting was indirect and Harvey couldn't see exactly where it was coming from.
"I've either died and I'm in Heaven's waiting room or I've just been kidnapped by aliens."
Harvey turned as he heard some slight sound and saw that he was no longer alone. The stranger was wearing a white, fancy-dress uniform all spangled with ribbons and medals. In the stranger's hand was a communicator or remote control that was getting battered into submission.
"Where's the elevator? Where's the door? What's happening? Where am I?" Harvey thought.
"Oh, boy." Harvey groaned in confusion.