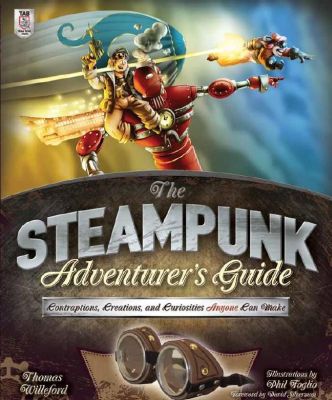 YA Fiction & A How-To guide for making props.

Paperback at Amazon
Paperback At B&N


Thomas has combined his talent for making props and his talent for telling interesting stories into one book. There is a charming little steampunk adventure story set in a complex world. Each chapter of the story ends with a tutorial on how to build a gizmo that the heroes of the story think they will need for the next step in their adventure. While written for children and adults alike, Thomas isn't talking down to his readers, no matter what their age. An excellent story, and a prop-making guide? Thomas Willeford makes it look easy and natural to have a combination like this to enjoy.


As to the story, Steampunk isn't an easy genre to write. That said, Thomas make it look easy. It is set at a Young Adult level, the protagonists are two young teenagers, and their companion robot. The world they inhabit seems both dark and dystopian, while at the same time bright and full of innovations. This is one of the prime examples of Steampunk at it's finest. The trick is to invent a world wherein all the fantastic inventions seem natural, enevitable, and commonplace. As the children travel from place to place on their quest, the reader is given glimpses of the politics, techlonogy, and culture of the world Thomas has invented. By the end of the book, the story comes to a conclusion, but the reader is left wanting more. I hope Thomas decides to continue on with this, and other similar stories for his next writing project.

As I said, along with the story this book is a guide to constructing various steampunk costume props and devices. It is written for skill levels from beginner to expert craftsman. Each project can be created with normal, everyday tools that are affordable and easily found in any hardware or department store. Naturally, if the reader just happens to have access to a machine shop and has the skills to use advanced power tools, then that's just fine. But as Thomas points out, you don't need more than just the basics to create any of these projects. There are thirteen projects detailed in this book, at the end of each story chapter. Each project chapter has plenty of photographs and drawings to illustrate the steps involved.

The projects themselves range from downright easy to fairly complicated. But the actual step-by-step instructions break each project down into simple and easily manageable exercises. The instructions make it clear what each step will involve, recommend the right tools to complete each step, and explain exactly what you are doing and why. And as you read along, you get more and more of an insight into not only the skills involved in making each prop, but also into the imagination that came up with these beautiful ideas. This book is much more than a "how-to" guide. It is also a very good introduction into the steampunk lifestyle itself.

Thomas does stress safety quite a lot in the project chapters. Since the book is meant for all ages, he has to make sure that the methods he details don't put anyone in any danger. Where knives or sissors are used, he relates the safe handling of them. Or for the youngest readers, asking an adult for assisstance.

This book is a delightful guide to making many different steampunk prop items. These props will help dress up your steampunk outfits, as well as your persona. It was written for anyone who wants to turn their hand to making their own props, personalizing their own devices, and having a lot of fun into the bargain.