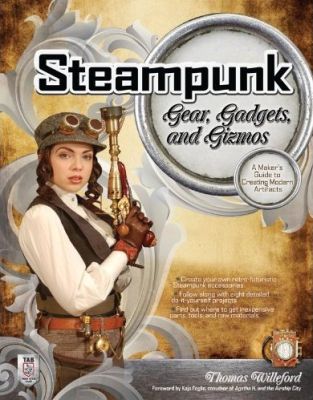 
If you are into steampunk and want to begin making your own props, this book is a "Must Have!" Thomas writes in an easy, engaging, humorous style that is a delight to read. His skill and imagination glows like the fires of a forge from within every page. Not only does he make the projects look easy, but he makes the writing of the book look easy as well. With a work of this kind, it would have been easy to "talk over the reader's head" in the way that some highly-skilled craftsmen do when they forget how long they had to learn in order to gain their own skills. Thomas doesn't do that. There's no jargon or techno-babble, he doesn't expect the reader to know all the tricks of his trade, and he makes jokes as he leads the reader through the different projects.


This review might seem out of place on a creative writing website, but the subject matter of this book brings it into perfect alignment. Steampunk isn't just a literary genre any more. It has evolved into a lifestyle all its own, as well. But it has retained a deep connection to literature, to classic science fiction and fantasy. To those people who aren't yet familiar with steampunk, I can only say that it is somewhat like getting lost in a good book, and then deciding to live there. It is more than historical re-enacting. Alternate-history re-enacting, perhaps. And like reading, the steampunk lifestyle is a lot of fun.

This book is a guide to constructing various steampunk costume props and devices. It is written for skill levels from beginner to expert craftsman. Each project can be created with normal, everyday tools that are affordable and easily found in any hardware or department store. Naturally, if the reader just happens to have access to a machine shop and has the skills to use advanced power tools, then that's just fine. But as Thomas points out, you don't need more than just the basics to create any of these projects. There are eight projects detailed in this book, but before the reader reaches those they are treated to a general introduction to steampunk, the art involved in scavenging parts and raw materials, lists of tools divided into different skill levels, and a look inside the mind of the writer. Each project chapter has plenty of photographs and drawings to illustrate the steps involved.

The projects themselves range from downright easy to quite complicated. But the actual step-by-step instructions break each project down into simple and easily manageable exercises. The instructions make it clear what each step will involve, recommend the right tools to complete each step, and explain exactly what you are doing and why. And as you read along, you get more and more of an insight into not only the skills involved in making each prop, but also into the imagination that came up with these beautiful ideas. This book is much more than a "how-to" guide. It is also a very good introduction into the steampunk lifestyle itself.

As in the best sorts of "how-to" books, the skills learned in each project tend to make the next project easier. As you proceed, you learn more and more. One early project is how to make various sorts of gauges. These can later on be used as sub-assemblies on more complicated projects. It is this additive nature of the works themselves that gives you so much more than the props you wind up with at the end of a project. As you go on through the book, you begin to look at the world in a different way, to see how ordinary everyday items can be re-purposed into something else, and to understand the mind-set of the steampunk craftsman. There is a glimpse of the "why" of a design alongside the "what" and "how." Once you begin to understand the intended function behind a particular prop, the "why" it is, then the details of the design start making sense as if the prop were a real, functioning machine. This is something that Thomas stresses, that each part of a prop should appear to have a real function. If you include a gear or cog on your device, it should at least look as if it could do something, rather than just be a funny shaped bit of metal glued on as a decoration. If you can make the gear turn another gear, or rotate a shaft that is connected to some other part, etc. then you are well on your way to becoming a steampunk craftsman, a Maker.

This book is a delightful guide to making your own goggles, gauges, ray guns, and other steampunk prop items. These props will help dress up your steampunk outfits, as well as your persona. It was written for anyone who wants to turn their hand to making their own props, personalizing their own devices, and having a lot of fun into the bargain.