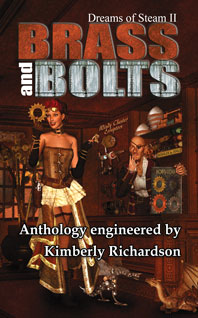 Direct Link To The Book's Page At Kerlak Press

General impressions of the album/book:


This collection of steampunk stories is a "must have" for any fan of the genre. I'd also recommend this, and the other volumes in the series, as an introduction to anyone just becoming interested in exploring the literary side of steampunk. 25 stories in the collection, and I couldn't find a single clunker! I hated every time I had to put the book down for any reason. Each story is a bright and shiny gem, set in polished brass and copper.


Steampunk isn't an easy style to write within, but every writer in this anthology makes it look easy. The writing flows smoothly, the characters leap from the pages in full, vibrant life, and the stories each explore a different direction of the possibilities held within the domain of steampunk. It is as if Jules Verne, H.G. Wells, Conan Doyle, Mary Shelley, and all their peers sat down to High Tea together one day and decided to write new, fresh stories exploring the full range of Victorian-era science fiction and fantasy. Steampunk fiction goes beyond mere historical retellings and launches itself into adventures to the far reaches of the imagination. These stories absolutely explode with steam-driven adventure, inventions, robots, explorers, mad scientists, and just plain ordinary folks living in a world where our historical Industrial Revolution took a different path.

But it isn't all about the machines and mechanical devices. Each story explores how people within that setting live and breathe and interact in a reality that just happens to contain fantastic old-fashioned technology. The retro-tech sometimes takes a back seat to the characters, sometimes shares the stage as an equal, and sometimes fades into the background like a perfect Butler - Unnoticed until needed. Steampunk fiction can be overpowered by the trappings of its mechanical inventions, but you won't find that in this collection. Each story strikes a balance between characters, their setting, and the set dressing. The different styles of the writers don't clash because each story is so completely self-contained. Reaching the end of one story leaves the reader eager to begin the next. When I finally reached the end of the book I wanted more. I wanted to go see what else each writer has written so that I could dive back into the worlds of their imaginations. I'm glad there are more volumes to come in this series. Dreams of Steam was the first volume, and Dreams of Steam III is already in the works, being assembled from the gears and cogs and clockwork bits these writers use so well. It will be difficult to wait until the next thrilling adventure hits the presses.

Background info on where you can buy this book: