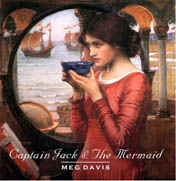 Long ago, when I first started buying filk albums, there were certain ones that you cherished and played over and over again. One of the tapes that got played endlessly by me was Captain Jack and the Mermaid, a delightful collection of music by songwriter Meg Davis. Now, for the first time ever this wonderful album has been made available on CD.

Making it happen was no easy task, though. Meg relates the story of saving the orignal masters of this recording:

A great deal of work went into the making of this Special Edition 2000 CD and you all have David Greenspan from the Interlochen Music Academy to thank. The master tapes for all of my earlier albums were becomming so deteriorated that, if Mr. Greenspan hadn't rescued them when he did, all of the recordings from Captain Jack to Swing the Cat would have been gone forever. The masters were taken to a unique lab in Washington, D.C. and baked in a special process which bonded the 'sound' layer to the tape layer of the masters. This special process took many long hours to complete. When that was done, it was then time for David Greenspan and his lab engineer to remix and digitize all of the music from the analog tapes. The 'baking' process saved the music but Greenspan could only run the tapes through the analog machines ONE time to get the music off them. As they were being played that last time the music was literally turning into oxide dust and floating away. Saved in the nick of time, these recordings now come to life as if I had just stepped out of the recording booth. Layers of sound which I originally recorded in the studio now come to life and present a new depth and never heard before.

Well, the end result was certainly worth it! The CD transfer is clear and crisp, and I'd almost not believe these recordings were originally laid down in the seventies if I didn't own the old tapes. In addition to the eight tracks from the original album, there are also 9 bonus tracks: five songs selected from two other vintage Meg Davis recordings, Swing the Cat and Dream of Light Horses, plus three live tracks, making this more than your standard reissue.

This CD captures Meg Davis at her best. From the whimsical "Swing the Cat" and "Monsters Lullabye" to the haunting and mysterious "Elf Glade" and the mournful title track, this album will delight fans of all ages.

For information about ordering copies of this album, see: Meg Davis's webpage or visit your favourite filk dealer. This month's poetry section contains the lyrics to Captain Jack and the Mermaid, one of the songs found on this album.
Review © 1999 Robert T. Wynne. All Rights Reserved.
Review copy of this album was provided by Meg Davis. If you are a filk publisher ( or a publisher of material that would be of interest to sf&f fans) and would like to provide Aphelion with copies of releases for review purposes, please contact Rob Wynne for details. Read more by Rob Wynne